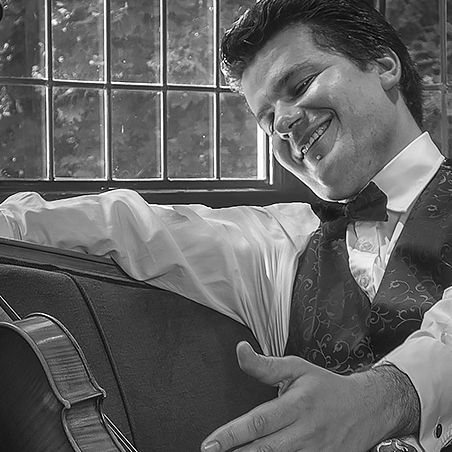 Praised for his intense, innovative interpretations Alexander Zemtsov is one of the most versatile and sought after musicians on the music stage today. He has established the recognition as a soloist, conductor, professor and chamber musician.

Alexander Zemtsov is a professor in some of the finest Music Universities in Europe: Viola Professor at The Guildhall School of Music and Drama in London, University Professor at the Vienna Konservatorium Privat Universitat and Professeur invite the HEMU - Haute Ecole de Musique de Lausanne in Switzerland.

Alexander was born in 1978 in a family of musicians. He attended the Gnessin Music Lyceum in Moscow, the famous school for gifted children, where he studied under Prof.E. Ozol. He continued his education with Prof. Michael Kugel in Hoogeschool Maastricht and post graduated from the Hochschule “Hanns Eisler” Berlin in the class of Prof. Tabea Zimmermann. Since the age of 15 Alexander has been extensively performing as viola soloist with numerous renowned orchestras in Europe, USA, Asia and Australia. Among others he regularly performs as soloist with conductors such as Alexander Vedernikov, Vladimir Jurowski and Neeme Jarvi. Alexander´s mastery and artistry have been widely recognized internationally and have brought him numerous prizes and awards International Competition "Classical Legacy" in Moscow (First prise 1995), at the Elise Meyer competition in Hamburg (First prise 1997),at the 8th Brahms competition in Poertschach, Austria (First prise 2001) and many more.

Aged 23 Alexander was appointed Principal Viola of the London Philharmonic Orchestra. In 2011 after 9 years of collaboration with LPO Alexander left the position and dedicating himself entirely to his demanding career as soloist and chamber musician.

A devoted chamber musician he has performed in prestigious venues with partners such as Dmitri Sitkovetsky, Gerhard Schulz, Peter Donohoe, Patrick Gallois.In 2010- 2012 Alexander recorded string trios by Mozart and Faure Piano Quartets with The Hermitage String Trio and Kathryn Stott on Chandos.

As well as the complete Brahms and Mahler Piano quartets with Anton Barakhovsky, Wolfgang Emmanuel Schmidt and Eldar Nebolsin on Naxos to be released in 2014.Alexander is regularly recording for Naxos, LPO Live and Chandos labels." …impassioned and technically immaculate playing…" Classicalsource "...played with furious dexterity..." Guardian "…in the same league as Bashmet…amazing emotional depth…" Britten CD Review